Russia continues to face stiff opposition from Ukraine, more than a month now since its invasion. Ukrainian forces have begun attempts to liberate some areas from Russia, which said this week that it has reduced its military operations near Kyiv and the northern city of Chernihiv.

Meanwhile four million people have fled Ukraine, and a quarter of the country’s population is said to be fleeing their homes. 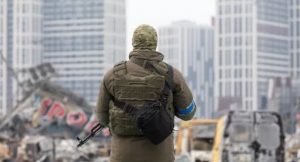 BBC journalists near the battlefield, are answering your questions:

In view of Ukraine’s recent attacks against Russia, and if diplomatic talks between Ukraine and Russia fail, can Ukraine “win” this military war? – Harry Tinsley

In the military context so far things seem to be going well for Ukraine. Ukraine has shocked President Putin, and the World at large, by growing skilled and stubborn opposition to Russia’s largest, well-equipped army.

We saw an example of Ukraine’s success in this war in Kyiv last week. Ukrainian forces told us that the Russians had tried to enter the city four times last month, and each time they encountered fierce opposition.

The Russians have not been able to enter the capital Kyiv, overthrow the government, or take over any major city let alone Kherson – south. Russia has destroyed more cities than it has.

However, it is too early to predict the outcome of this war. We could be at the beginning of a long war. Russia now says it will focus on the Donbas region in eastern Ukraine.