HomeNews101-Year-Old Prepares for the Grave Neighbor to his wife,That is a reason
News

101-Year-Old Prepares for the Grave Neighbor to his wife,That is a reason

The elderly woman, who has 10 grandchildren and great-grandchildren whose number is not known, has claimed to have taken the decision because she fears she will be buried away from her queen (wife) who died five years ago and buried in the area of ​​their home.

He said that if his children and other relatives change his mind and bury him somewhere else, he has written a will for them. The elderly wife, Lipina Lyatuu, died in 2016 at the age of 91.

Speaking to our correspondent recently, the old man said, since man must die and that he too is expected to die in a few days and enter his eternal home that he has built for himself, he has seen to it that he is fully prepared for burial.

“So far I have spent more than one million shillings digging a grave and building it, it still only covered it, after that I am still waiting for my last days to live on earth to be fulfilled.

He added that, before reaching a decision to do so he engaged the relatives where they rejected him but did not stop the exercise.

“I want people on the day of my death not to cry, but to celebrate by eating and drinking because Allah has given me life for many years,” he said. 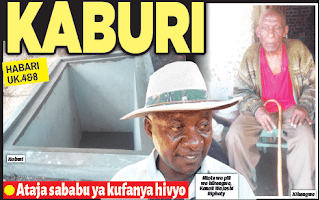 Commenting on their father’s decision to build a tomb while he was still alive, some of his children, including Riphaty Ayo, born in 1948, said they were shocked to the point of forbidding their eldest son to do so but failed due to his strict stance.

“In fact, the old man insisted that he be buried next to his wife and not be sent anywhere even if the town planning law forbids it and he has given me a letter informing Arumeru District Commissioner Jerry Muro but I have not sent it yet,” said Ayo.

And Eliyakisinde Ayo, the fifth child and Yose Ayo the sixth child of the old woman, said their father’s move to dig a grave for them was sad because every time they looked at the grave they were in tears from believing that their father was dead and waiting to be buried in the grave.

“We fought to persuade my father not to dig himself a grave because it is the same as taking his own life, the old man rejected us completely we had to get used to this situation,” said Yose.